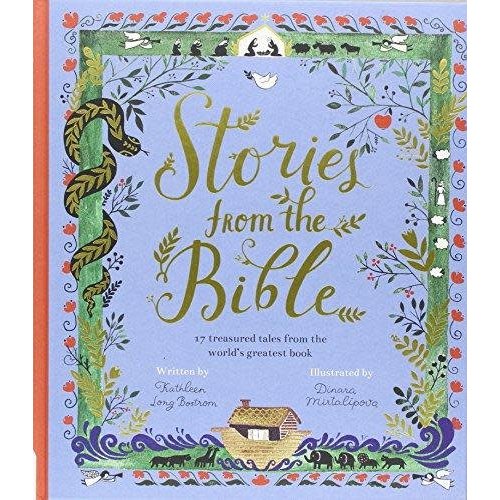 Stories From The Bible Hardcover Book

A beautifully illustrated introduction to the Bible, retelling 17 beloved stories from the Old and the New Testaments for very young children. The stories are: The Creation, Adam and Eve, Noah's Arc, A Son Named Laughter, Joseph and his Amazing Coat, The Baby in the Basket, The Ten Plagues of Egypt, David and Goliath, Jonah and the Big Fish, The Birth of Jesus, The Sermon on the Mount, Four Faithful Friends, The Feeding of the Five Thousand, The Good Samaritan, The Last Supper, The First Easter, Breakfast on the Beach.

KATHLEEN LONG BOSTROM has been an ordained minister in the Presbyterian Church (USA) since 1983. Kathleen has written over 40 books, which have sold well over two million copies in the 16 years since her first book was published. Her Little Blessings books are printed in 18 languages, including Chinese, Russian, and Indonesian, and the Italian translations of her books can be found in the Vatican bookstore in Rome, Italy. Since 1998, Kathy has served on the board of the Presbyterian Writers Guild and held office as its president for two terms. She is also a member of the Society of Children's Book Writers and Illustrators and the Authors Guild.Dinara Mirtalipova is a self- taught illustrator/designer. Born and raised in Tashkent, Uzbekistan, she eventually landed in snowy Ohio. Raised in Soviet Uzbek culture, she inhabited Uzbek/Russian folklore that still influences her work. For a long time Dinara has been among illustrators and designers at American Greetings. She left her creative role at American Greetings in February 2014 to pursue her ever growing freelance career and to start a new chapter as a free spirit independent designer. Currently Dinara works from her home studio in Sagamore Hills, OH.

"About this title" may belong to another edition of this title.