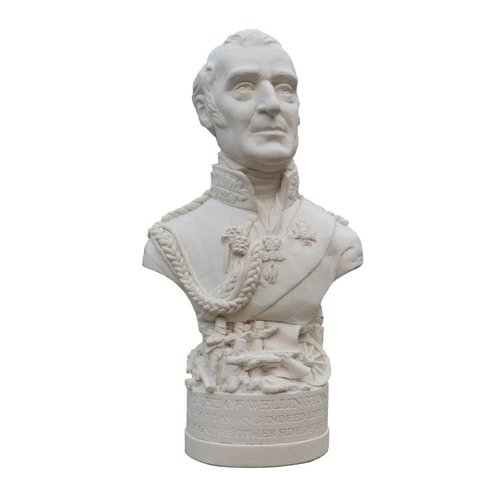 Bust of the Duke of Wellington made in British Gypsum Plaster. Field Marshal Arthur Wellesley, 1st Duke of Wellington (1769-1852) was an Anglo-Irish statesman and one of the leading military and political figures of 19th century Britain. He defeated Napoleon at the Battle of Waterloo in 1815 . Around the Base. The figures around the base include scenes from the Battle of Waterloo with riflemen, horses and canons as well as a small depiction of Napoleons capture. The etch around the base reads - "THE BUSINESS OF WAR, AND INDEED LIFE, IS GUESSING WHAT IS ON THE OTHER SIDE OF THE HILL"