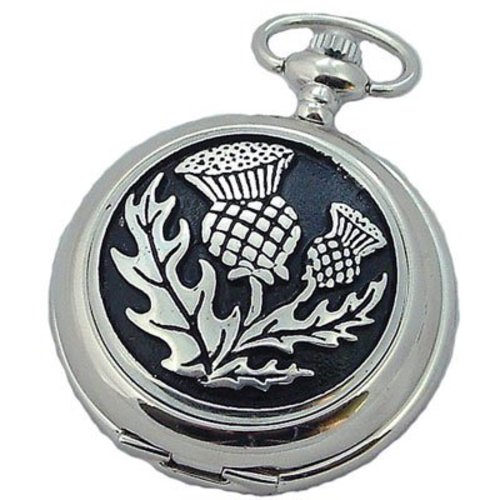 Scottish Thistle pocket watch, with Quartz movement and 3 year battery. Comes complete with chain and leatherette presentation box. How, you may ask, did such a thorny flower become a National Emblem? Well, so the story goes, a very long time ago when Scotland was ravaged by Viking invaders, a group of Scottish fighting men were resting overnight in a field. Unknown to them, a raiding party was preparing to attack this group of Scots, under cover of darkness. As the attacking Vikings approached the encamped Scots, they stood on a patch of Thistles with their bare feet and, of course, let out cries of pain as the thorns dug deep into the soles and toes. The Scots, Having been awakened by this rammy, were able to fight off the attackers. So, from that day, the Thistle has been adopted as Scotlands National Emblem.